Commander Mondays: All The Budgets of the Rainbow

As I mentioned in the last bit of my article last week, reader and fellow contributor Pierre Dupont has requested I make a five-colour good stuff budget deck for one of my articles. So I decided to go with a deck that’s full of cheap and fun jank, with two of my favourite alternative win conditions: Maze’s End and Door to Nothingness.

Maze’s End has always been one of my favourite cards, even though it’s not amazing. Luckily for us, some useful enablers were part of a deck that just got banned in Modern. Summer Bloom allows you to get the lands out faster if you draw a bunch, and Amulet of Vigor makes the Maze’s End more efficient, as well as makes running twenty tapped lands feel less garbagey.

We also run the few cards that allow you to search for any land, such as Realm Seekers and Expedition Map. One of the silliest ways in the deck to amass gates is with Salvaging Station in tandem with Expedition Map. Or Gatecreeper Vine and Deadeye Navigator.

Unfortunately, there’s not as many ways to be crazy silly with Door to Nothingness it sort gets crammed in the deck because winning with it would be incredibly satisfying. There is a Chromatic Lantern in the deck, and a few ways to tutor for the door, but that’s about it.

Besides the two win conditions, there’s a few other cards that don’t get enough EDH love because they’re restricted to 5-colour. A couple of them have been in the last few decks I’ve posted, but these are my favourites.

Because of the replacement cost, it’s not actually legal in mono black, but in decks where you can use it efficiently, it packs a punch. Consider the fact that in this deck you’re mostly trying to win with a combo, all this guy does is help you get there faster.

I’ve actually built this deck once before, and I remember the absolute look of horror and respect on Pierre’s face when I cast Conflux in an EDH tournament. Resolving it was even more satisfying.

Although technically legal in any deck that plays green, it’s only really efficient in a deck that sports all four glorious colours of the pie, plus white.

One of those cards that makes so many people sore, regarding its lack of Legendary Creature status. I know many people who like to use it as a Commander under house rules, I usually tend to be fine with it as long as it’s not in a tournament.

You may have noticed that this thing is in all of my five-colour lists, I love it to death. I recall once in a tournament (same one with Pierre that was already mentioned) I resolved a Legacy Weapon with aProphet of Kruphix (R.I.P.) on the battlefield, watching the terror on my opponents’ faces as their lands all get exiled was wonderful.

What Else is There?

Besides the combos, and some pet five-colour cards, the deck is just chock full of good utility. Everything you’d expect out of all colours, but without breaking the bank. However, it is also quite noteworthy that Mwonvuli Beast Tracker can find any of the “Bringer” creatures in the deck. 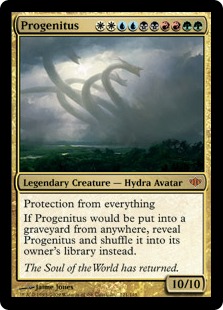 That’s all for this week! Next week I’m going to delve into a Commander I’ve built numerous times and disliked, but finally found a list that satisfies my need to ruin others’ fun.